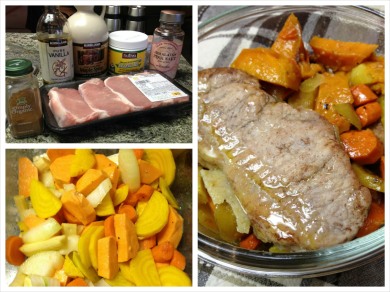 It was bound to happen!  It is now cold enough for the snow to stick to the ground here in Northwest Indiana … and that inspired me to look for recipes that would slow roast in the oven. I found a recipe that hit the spot at TGIPaleo.com for Pork Chops.  My local Meijer’s just started carrying Coleman Natural Pork … so, it was meant to be!

Preheat oven to 425 F.  Heat the coconut oil in a large skillet over medium-high heat.  Sprinkle the chops with salt on both sides.  Sear the chops on both sides (about 3 minutes on each side, till lightly browned). Remove the chops to a baking pan.  Drizzle the vanilla, and syrup over the chops and sprinkle with cinnamon.  Finish the chops in a 425 degree oven for 10-15 minutes.

Serve 4 people at approx $3 per serving.

I served this along with some organic root veggies (carrots, parsnips, sweet potatoes and yellow beets) that I tossed with olive oil and seasoned with salt and pepper.  Roasted them in oven at 300 F. for about 30 minutes prior to cooking the chops, and then finished them off together.  Mmmmm!!!